Skip to content
When looking for things to do in Juneau there are several points of interest that you don’t want to miss on your Unplugged Adventures Jeep excursion. Awaiting you are broad mountain vistas, lush rainforests, native buildings and historical sites – and Douglas Island, which is a short two-minute drive just west of downtown Juneau. Photographers, historians, and educators find much to see and learn on this shore adventure to historical North Douglas Island.
Historical Note: Joseph Whidbey, master of HMS Discovery during Captain George Vancouver’s expedition in 1794, was the first to sight Douglas Island. Vancouver named the island for the Bishop of Salisbury, John Douglas. 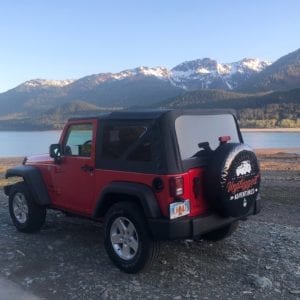 Douglas Island is a tidal island, connected to the mainland on the north end when the Gastineau Channel is at low tide and can be reached by crossing the Douglas Bridge – a two-lane road that accommodates vehicles and pedestrians, connecting downtown Juneau with Douglas Island. This will take you to one of America’s best ski resorts, Eaglecrest Ski area, as well as views of the snowy peaks of Admiralty Island, home of the densest brown bear population on earth! Mount Ben Stewart, named in honor of Benjamin D. Stewart, an early mayor of Juneau, is the island’s highest point.
Usually thought of as two separate and distinct areas – West Juneau and North Douglas – the island has many things to do in Juneau that are popular with Jeep adventurers, including the Treadwell Mine Historic Trail at South Douglas. The trail takes you to Treadwell Glory Hole, once the entrance to a network of mineshafts under the Gastineau Channel. A spectacular waterfall drops into the Glory Hole.
Historical Note: Once the site of one of the most productive gold mines in the United States, the trail starts from the south end of St. Ann’s Avenue in Douglas. Further down on the shore you can see the remains of buildings and old mining machinery, and just to the south is a pit where the mine collapsed during torrential rains in 1917. There are remnants of old docks still visible at the shoreline.
Things to do in Juneau may include a visit to the native cemetery on Third Street, with its interesting and unique spirit houses, and the resting place of members of the Taku Indian’s Raven Clan.
Historical Note: The Tlingit people of Southeast Alaska have two moieties (descent groups), each divided into several clans. Each clan has its own history, songs, and totems, and forms social networks of extended families, functioning as a political unit in Tlingit society. The two moieties of the Tlingits are Raven (Yéil) and Eagle (Ch’aak’).
Douglas Harbor is reminiscent of wild adventures and insightful reflections. Wildlife sightings are not an unusual occurrence – eagles soar overhead, deer forage at the edge of the forest, and ducks crowd the shoreline. Curious young sea lions frolic in the coastal waters.
From downtown Douglas, you can hike down to Sandy Beach on the Rain Forest Trail. Sandy Beach was made from mine tailings from the historic Treadwell gold mine and is the only sand beach in the Juneau area. Nearby is the Island Pub on Second Street, which is a great place to stop for lunch and experience their amazing fire-baked pizza while enjoying an incredible view across the water of downtown Juneau.
The Rain Forest Trail is a gem hidden away from the main routes but should be at the top of your list of things to do in Juneau while visiting Douglas Island. The mile-long trail passes through the old-growth forest with thick, high-rising Sitka Spruce and Western Hemlocks. The trail emerges onto the shores of North Douglas where Fritz Cove and Auke Bay meet Stephen’s Passage. The majestic Chilkat Mountains overlook the rocky beach. More wildlife can offer amazing photo opportunities with seals, sea lions, eagles, porcupines, and bears along with a host of seabirds. And if you’re lucky, porpoises and whales can sometimes be seen.
Unplugged Adventures knows you have a lot of things to do while in Juneau, and our number one priority is making the most of your day. Whether it’s a hike on an ice-capped glacier, trying your hand at gold panning, or viewing historical sites you are looking for, we believe some of the best things to do in Juneau can be experienced on a Jeep tour of Douglas Island. You can visit us online or call 1-800-989-9868 to book your adventure today.
Posted in Things to do in Juneau, What to do in Juneau and tagged Juneau Alaska things to do, juneau shore excursions, things to do in alaska, Unplugged Adventures Jeep Tour