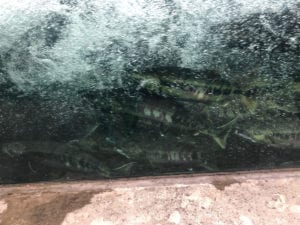 A favorite Unplugged Alaska Jeep excursion for things to do in Juneau is a tour of the Douglas Island Pink and Chum’s Macaulay Hatchery. Discover how salmon manage to find their way back to the place of their birth – even with the passage of years! Your hands-on experience at DIPAC will teach you all about the life of salmon – from hatching to release.

Origin of Macaulay Hatchery
DIPAC evolved in the 1970s after Ladd Macaulay, a biology teacher originally from Seattle, began an environmental education program for students and others to experience the imaginary life of the Klondike Gold Rush. He later left teaching and began employment with the State of Alaska to pursue his interest in developing a hatchery in the Juneau area.

DIPAC is committed to sustaining and enhancing valuable salmon resources of the State of Alaska for the economic, social, and cultural benefits, and to promote public understanding of Alaska’s salmon resources and salmon fisheries through research, education, and tourism.

Historical Note:
The Klondike Gold Rush, often called the Yukon Gold Rush, was a mass exodus of prospecting migrants from their hometowns to Canadian Yukon Territory and Alaska after gold was discovered there in 1896.

In 1974 salmon runs had reached a record low. Legislation was enacted to permit private non-profit hatcheries to partner with the State of Alaska to enhance salmon resources. Ladd Macaulay turned his vision for salmon enhancement into the original DIPAC hatchery, which was at that time located in the backyard at his home on Kowee Creek. Later, the permanent facility was established in one of Joe Juneau’s old mining shafts.

Historical Note:
Joe Juneau was an early gold prospector of renown in the vicinity of Gold Creek. Miners named the new city at the base of Gold Creek after him.
[Read Joe Juneau’s biography HERE.]

In 1977 volunteers captured salmon eggs from Fish Creek and after fertilization they were moved to DIPAC’s first fish pond – a children’s plastic swimming pool! 20 to 30 thousand pink salmon were returned to the Kowee Creek Hatchery in the late 1970s.

After Macaulay left employment with the State of Alaska he began expansion of a second hatchery at Sheep Creek. Thus DIPAC went on to become a major salmon producer for Southeast Alaska and a favorite Unplugged Adventures shore excursion of things to do in Juneau!

A Jeep excursion to the hatchery and visitor center is a fun, educational and affordable opportunity to see a variety of exhibits featuring many species of wild Alaska salmon. Located just a couple of miles from downtown Juneau and the Unplugged Adventures office (where you can rent a Jeep) the DIPAC experience is one of the not-to-be-missed things to do in Juneau experiences. Smoked and non-smoked salmon and King Salmon Jerky is available for purchase. (Ship some home for later enjoyment!)

Visit our website for more information on the Top 10 Things to do in Juneau Jeep excursions.